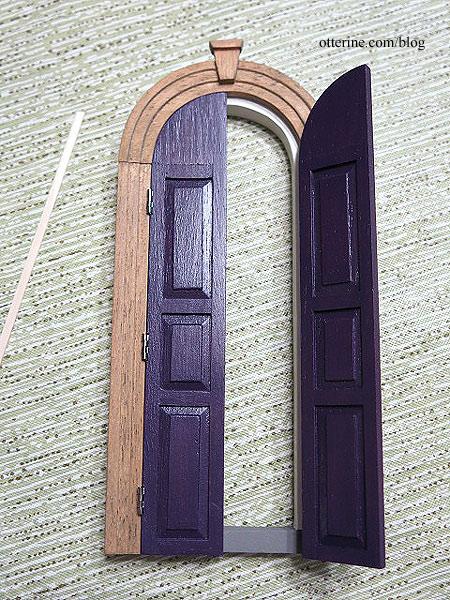 In my perusal of windmills online and from my own stash of vacation photos, I've found that the windows and door frames are often rust red or white.  I've opted for Americana White Birch in satin instead of true white.  Painting frames instead of staining makes life easier all around.  I don't have to split between interior and exterior colors, and the filling on the arched door conversion won't show.

To make life easier, I microwaved the door frame to separate the interior trim.  I was then able to work with all the pieces without masking.  White trim on the interior would be a bit stark, so I stained the interior trim Minwax Driftwood to coordinate with the circle library.  The tiny bit of white showing will be fine and not as intrusive as large white frames.

As for the door color, I fell in love with an online inspiration photo.  To achieve a close approximation, I used two coats of Aubergine by Folk Art followed by two coats of Purple Pansy by Anita's.  I finished it off with Krylon satin spray.  The hinges are by Classics.

I cut mortises in the door panels to hang the doors like the real deal.  Tiny hinges are fiddly and temperamental, but the door turned out pretty well considering it started as a window with shutters.

As expected, there was a gap between the door panels.  If I had built the doors from scratch, I could have made a rabbet join down the middle.  Instead of trying to reverse engineer that sort of thing from a ready-made component, I will just add a thin strip of wood painted to match down the middle on the interior.

The left panel hinges are fairly tight and don't want to stay completely closed, so I might end up adding an interior bolt.  We'll see after I get the knobs in place.