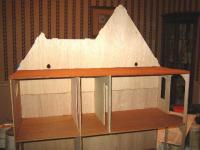 Jimmy decided that he would raise the roof line on the smaller room to enlarge the room, and also to give a more even space. He took the piece of wood which that wall portion had come out of to make himself a pattern (because there are tabs there), and then he cut another another piece of wood to go on top of that area, adding about 1 1/2 inches to the height on that area. He glued the piece in, and then put wood putty on it. 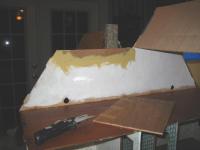 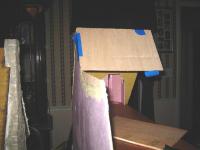 Jimmy says if you don't want to sand all that wood putty, if you have a cat, just put some milk on the wood putty and let them use their sandpaper tongue on it. Funny guy. Chloe must have been "helping" again (or trying to lick his eyebrows off), which gave him THAT idea, LOL!Anyhow, he then cut a new board to make a straight roof to go across the area that he raised, and glued it in. Then he cut another board to make a room divider, and voila, you now have a larger and more usable smaller room (the recipient will be happy because she's now getting a bathroom, LOL!)! And of course we used our normal method of weighting down the roof while it dried--the old trusty paint can! 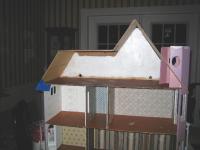 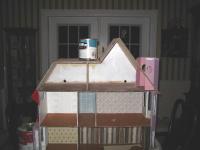 Here's what those two rooms look like now. The larger peaked room is enlarged, and the smaller room is enlarged and opened up. If you look at the last picture, you can see the line where the piece was added to raise the roof. 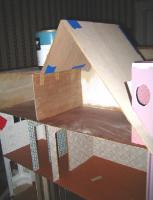 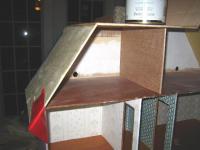 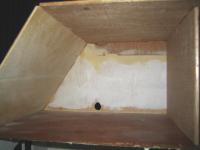 Now, what to do for the trim ...Compliments of LPCullen