I have been very busy on the house the last few days. I added newspaper wallpaper and wooden beams to both second floor rooms. This was another war against warping. Each individual page of newspaper was cut out and applied. The beams are made from some scrap craft type sticks I had laying around. 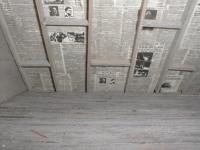 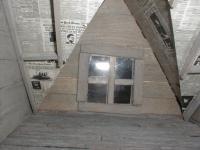 It took me a few tries to come up with a workable roof. I wanted it to resemble a tin roof. I used corragated scrapbook paper. Darrell spray painted the papers for me, as I can't be around those fumes. As you can see by the clamps on the back edge, I'm still fighting the warping war. 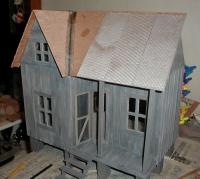 This next picture is here because I finally won the war aginst warping. This time instead of gluing the boards down, and regluing the warpage, staining, regluing the warpage, waiting untill dry and gluing some more, I changed my tactics. I stained the boards. While they were still damp I cut them to size and glued them on. I attached a clamp at each seam and won the war. there was no need to reglue anything. 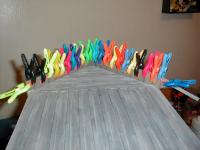 The roof and flashing are on, but still need to be aged, that will take a few more days. The door and screen door have been attached. The steps are just sitting there, as they will be glued on after it has been attached to the base. 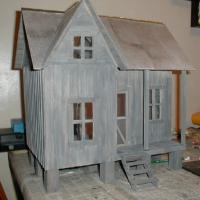 The house has been attached to the base, steps glued on, and the landscaping has begun. It will have a rock pathway that will line up with the rock pathway to the Greenhouse (built earlier and on a seperate base). 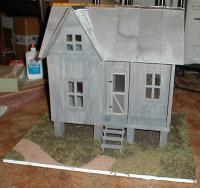 And last but not least, here is a close up of the porch. 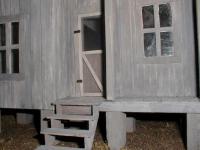 Today I plan to start aging the roof, landscape some more, and put in the kitchen curtains.Compliments of DarrellandMelissa