Well, progress has slowed somewhat, but that's to be expected, especially since I'm using popsickle sticks for tongue-and-groove siding . . . which means I have to cut off the ends. My hand aches, my back aches and I'm just about up-to-here with popsickle sticks. I will, however, perservere as I like the way it's turning out. 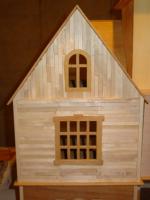 I cut two windows out on the sides to match up with the sides of the original house. They won't exactly match all the other windows on the house, but at least I was able to make new trim with my handy Dremel. 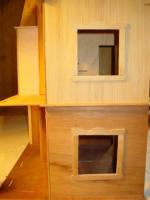 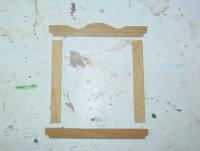 I also closed in a doorway on the main level. This is where I will build a false wall and add a curved staircase. I have it all figured out in my head . . . if it actually works will be a miracle! 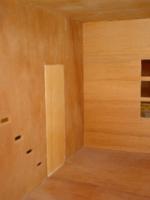 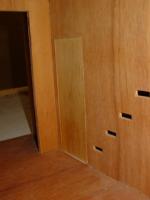 My biggest challenge so far has been figuring out the turet which hangs over the front porch. I was originally going to use the roof off of a bird house I found at Micheal's, but it just didn't cut it. The height and angles were all wrong. 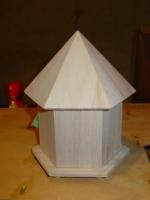 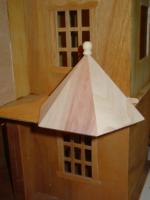 That's when I brought in the BIG GUNS . . . BRIAN!! He helped me figure out all the angles, et cetera. When he started talking the square root of this equals the length of that . . . I threw up my hands in horror and begged him just to give me the final tally. Math, my dears, is not my strong point . . . it frightens me! 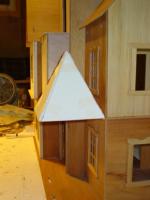 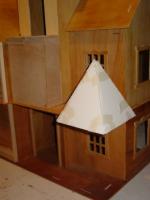 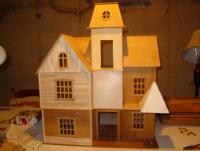 So progress is slow . . . that and the fact that the Beacon Hill was bellowing for it's doors! Enough, she said!! How come THAT house is getting all the attention when I'm not even finished yet! What nerve! I cowered my head in shame (what else could I do?) and spent the day today putting in doors. They turned out pretty fabulous! I'll post pictures in my Beacon Hill gallery later.

I also had to go and buy new pink paint. I started painting the trim, but the pink I had just wasn't right. I think I've finally got the right color and tone. At least I think I do . . . .