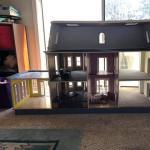 By HalfScaleDollhouseLOVER,
February 17, 2018 in My First Dollhouse