boat/ house in a bottle- what's the trick? 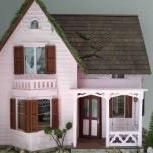