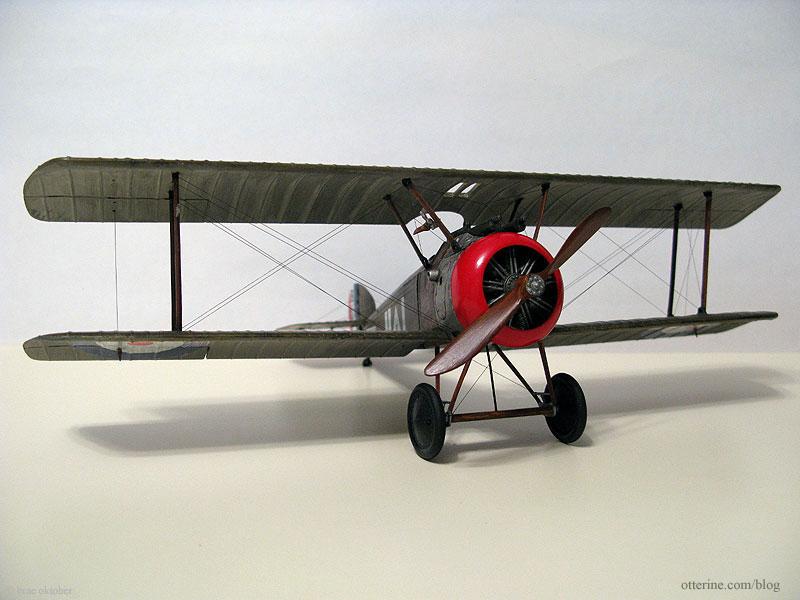 It has been a long time since I put together a plastic car model, and I have never done any sort of aircraft before let alone one with rigging. I opted for a 1:32 scale plane since a 1:12 scale replica would have overpowered the building itself as well as my condo. Haaaaa! I think the one I chose looks appropriate for scale and enhances the project without taking over completely.

This is your basic plastic model and, as such, some detailing is lost and some is likely historically inaccurate. The kit was inexpensive, but I was able to eek out enough detail to suit my tastes without breaking the bank.

The shiny red nose turned out so well, I couldn't bring myself to age it or dirty it in any way. Not much of the engine shows, but I detailed what would be seen. The "wood" portions were easier to mimic than I thought they would be. When I read that you were to first paint the base color and then paint on the wood grain, I thought, "Riiiiiiiiiiiight."

Maybe it's not fine woodgrain, but it is remarkably convincing.

For the rigging, I basically used the kit method, though I used black "transparent" thread instead of the kit supplied black fiber thread. I also waited until after the plane was assembled to add the lines. I didn't see how you could add the lines during the body assembly, then keep them out of the way and clean during the painting process. This meant a bit more headache in the end, but it worked out well.