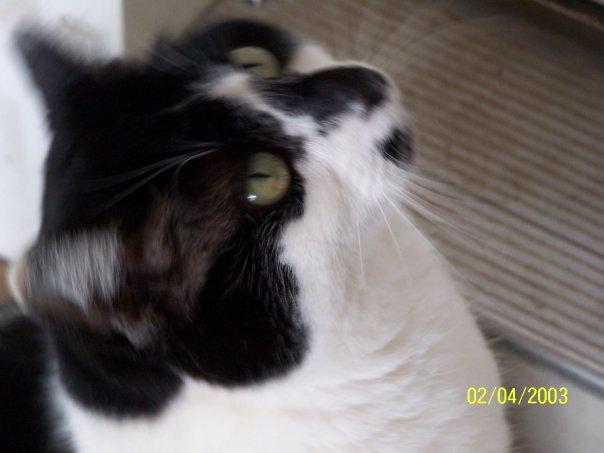 Poor Snickers was battling cancer for who knows how long. I guess it wouldnt have been humane to let her keep going on, fighting something she wouldnt win. I picked her out myself: my dad told me if I got accepted to Nazareth Academy and decided to go, I could get a kitten. he also said that I had to name it "Snickers" since that is his favorite candy bar. My brother's friend, Casey, had a cat who had just had kittens so we walked down there and I picked her out of the cardboard box and took her home.

She was a very independent cat-she didn't like to be picked up alot and played with-she preferred to just go about her day and do cat things like sleep and hunt for birds and mice. If she decided to curl up with you, it was always on her terms. At the old house, she figured out that she could get outside by going through our mailbox, and so it became her personal entrance to the world. When she wantd to come back inside, she would get up onto the roof and sit outside my window and tap the glass with her paws until I woke up and opened it for her. She continued doing this after we moved to the new house-meowing at the front door until we woke up to see her little head silouetted against the moonlight.