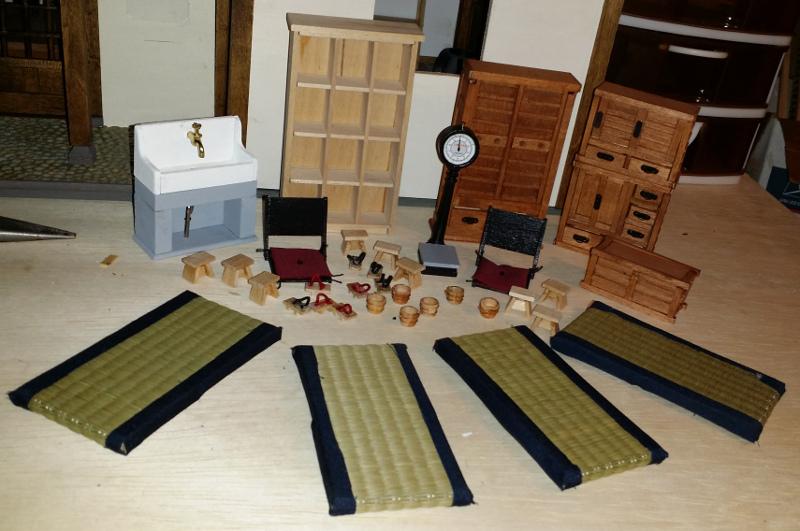 Here are some of the accessories I have made from the kit.

The sink is for the kitchen, and will go into the extension. I think it came out really cute. It has a brass faucet, and a little steel drainpipe.

There is a set of cubby holes for towels and things in the spa, that was quite fast to put together.

Then there is a scale. The kit was designed to be a ryokan from the 1950's or early 60's, and the kit even has TV sets. I am making mine to be more reflective of early in the century, so I'm not making the TV sets. I am undecided about whether or not I will put the scale in the house, since I doubt that would have been in an inn for travelers back at the turn of the century.

I can't remember whether or not I showed pictures of the two little legless chairs. They are black to look like lacquer, and have pillows with tassels.

There is also a little desk for the reception area.

Next are the six teeny tiny buckets with teeny tiny copper wire around them, ten little stools for the spa, four pairs of geta, (sandals), and four more tatami mats. All of those were a real pain to make, so I have been making only two or three of each of the more monotonous things each day. It's not that bad making two or three of something each day, but when you have to spend hours making lots of them at one time, it gets to be a chore.