It's been a day of frustrations. The house itself is a dream to put together however making mitred corners for an octagonal window without posessing sufficient math skills can be quite challenging After all the time I spent today on it I don't care if I ever make another octagonal window frame. I cut it out of scrap, recut.. recut.. glued in place.. pulled it off.. recut again.. <sigh> I'm sure tomorrow though I'll feel differently. It took a lot of time to figure out the angle to cut it at.. next time it will be a lot easier but I think I'll still plan on buying double or tripple the wood that I think I'll need just to have on hand for the mistakes I'll make in measuring. In the end I still managed to make the frame too large for the window but did find that the angle for cutting on is an imaginary line on my Easy Cutter half way between 60 degrees and 75 degrees. I really don't want to take them down and do them yet again. I'm afraid I'll shorten them too much and really mess up the windows (and not have enough wood left to fix it) so here is what the windows look like for now. I had thought I could live with the paperclay I put around the inside of the windows but after a couple of days they just looked worse and worse - I'll have to see how these look in a couple days 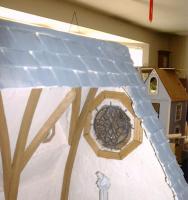 And now for the interior. I picked up a few bits of furniture for the inside while I was at the mini shop the other day. I had wanted something for the back wall but didn't know what. These two shields appear to be the right thing though I just tacked them up quickly with mini hold to see how I like them. They'll need to be straightened and applied correctly, and possibly painted first. I had wanted a sarcophagus for the back wall as well but for now the chest will have to do 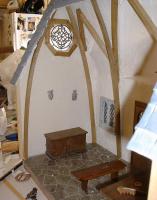 The front wall is much the same as it was - added is a table and gobblets and of course the new wood molding around the windows above. Also a single simple bench sits below the dias 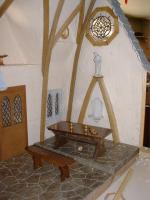 The interior as it is today:

The front door is completed sans hinges. The opening in the bottom was filled with 2 bits I found at the mini shop that are glued on to make up the door pannels and below that a rectangular piece that I cut from what was left of the kit sheet after all the pieces had been punched out. Staining the whole thing makes a world of difference and of course the "leaded" window panes are in place. 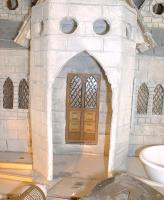