I've never done a full landscaping on a mini before, so this was a trial and error process. I wanted a formal japanese garden with a look in keeping with a Shinto Buddhist.

I scored big with a tree I found at Big Lots. It's one of those fiber optic things, but I discovered that if I pulled it out of the stand, it was no longer a bonsai tree........it was a perfect 1:12 scale tree for my garden!

Getting it to stand up in the garden was another matter. I finally used a round of florist foam and whacked a hole in the middle of it for the tree to stand. Before I glued in the tree, I smeared tacky glue all over the top and then sprinkled coffee grounds over it for dirt. (this was almost as much fun as the furry roof)

I painted the sides of the foam with brown paint and then glued on river pebbles.

The final step was to add a little coarse turf for moss around the edges of the rocks.

The shrine to Buddha was done the same way with a larger round of foam, then I added benches I made from scraps, a statue of Buddha and an offering bowl. The fence behind Buddha is made from dowel pins cut in staggered lengths, stained and glued together. The fence extends around both corners and then I added a few plants into the corner space. 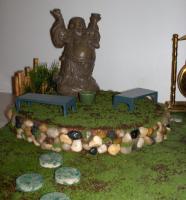