I have been working on the trim for the house still. Sometimes I wish it didn't take so long to do trim, but I like it and I like the way that it turns out and how it makes the house looks, so ... I am making very few modifications from the original design on this house, so the majority of the trim is going on it. I think the only thing I plan to leave off are the shutters on the bay windows.I've taken out the shutter trim and have sanded that down and working on that. I like to put one coat of white semi-gloss on anything that I paint before I put the actual color on it because I like the way that it makes the actual color turn out. I really like the way that the shutters look on this house! 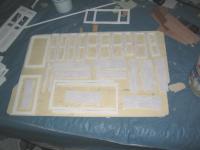 Jimmy has taken out my porch pieces and I have sanded them. He has begun putting the pieces together to build the porch trim, because I think it will be easier to paint that way. 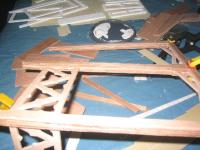 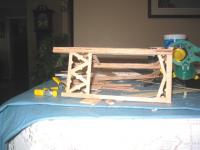 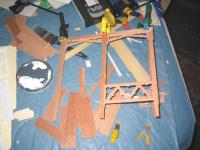 While Jimmy was playing with the porch pieces, and while I was waiting for the paint to dry on the trim, I took the house outside to the front porch to stain the roof shingles. Because I still like an oil based stain better than a water base stain, I take the house outside to do that part so that it doesn't smell up the RW house, LOL! I have decided to go with the same color as the floors, which is Minwax Golden Pecan. I put one coat on the shingles and then considered doing another coat, but truthfully I like the lighter "blondish" color and the contrast against the darker wood "floors". 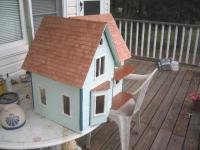 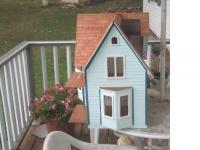 And now I must tell you my funny! Of course Jimmy and I, as well as various other members of our family, are quite used to seeing dollhouses in various stages of construction, but we forget sometimes that other people are not. The Westville is nearing its completion and is a very pretty house. So, anyway, we obviously had the Westville sitting on the table outside waiting for the stain to dry, and people were driving by and they kept slowing down. Then I saw a couple cars that had already went up the hill coming back down the hill and slowing down again in front of my house, and I was thinking what in the world are these people doing? It took me a few minutes to realize that they were eyeballing the Westville!Compliments of LPCullen