This weekend saw the first big push for progress after the windows took almost a straight up week to do because I was not satisfied until I completely customized every weekend.

The windows were done by taking transparency sheets, and cutting them to size using the windows included in the kit as a template. Then, based on some Pinterest inspo, and good ol' fashioned trail-n-error, I painted the outline of the windows with black paint mixed in clear glue. After it dried - I used either white or green tinted clear glue to fill in the glass segments that I wanted colored. I had to go one color at a time, letting the layers dry completely between coats to prevent bleeding (hence why it took almost an entire week). After I was satisfied with the colors, I painting one last outline on the top with black to have both sides identical.

Then, because I am me, I didn't like how 'flat' and perfect the clear part of the windows looked so I did a layer of acrylic poly something or other that was in my craft room. This created an awesome old window look that I am very pleased with.

Have decided to try putting wallpaper on both before and after assembly to see how it goes both ways. Because I want this house to look like someone in living in it as it is falling apart around them I wanted the segments of wallpaper to be really apparent. I cut scrapbook paper in 8 x 2 strips, smeared glue on the walls and then layed them down - using books to keep the paper flat while it dried. Then, I carefully pulled some of the wallpaper off and used watered down acrylic in various shades of brown, green, gray, and black to created an old and distressed effect.

Turns out I could spend HOURS creating gross wallpaper LOL - so fun and it is awesome to see the character start to come out.

Currently putting the varnish on the window and door casings so I can start gluing some stuff together!! 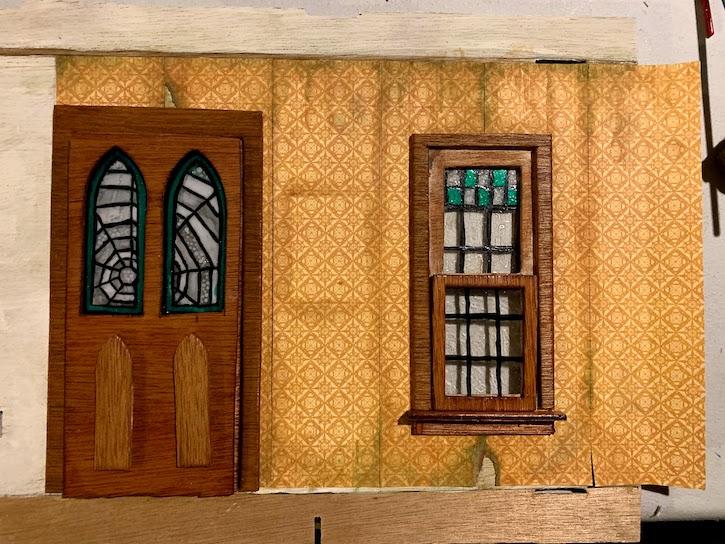