All the wallpaper is gone.  I tore off as much as I could, then scraped off some more.  When I got done with as much as I could that way, I moved to the sponge dipped in water, and a scraper in the other hand.  I finally gone down to mostly bare wall.

I finished removing all the loose pieces before, and got rid of the hot glue.  I used the hot gun to heat a scraper and putty knife, and used those tools (with a glove on my hand) to remove as much hot glue as I could along seams.  The problem with hot glue is that unless you're an expert, it's really hard to lay down a steady stream of glue, so an amateur leaves globs of glue here and there, with gaps in between.  So I went through all of those seams, removed any big globs, then inserted Elmer's Wood Glue into those seams.  I clamped where I could, and used strong tape when I couldn't clamp, to hold everything together for at least 24 hours.  Everything is now glued down except for the roof piece over the open face part of the house (that piece will go on later, after the inside is finished), and two smaller pieces. Those have to be re-made, as the pieces were broken or badly deteriorated when I got the house.

Once the glue was dry, I cracked open the tub of Elmer's Wood Putty.  Working on the outside, I went over all the joints, and filled in with the putty.  I used the wood putty on the roof as well (except for the side where the roof is removed.  That piece of roofing (and two smaller pieces) will be replaced towards the end, once the interior has been painted or papered.

Today I removed all the old shingles (only two pieces of the roof were shingled.)  Then I sanded that part of the roof, all the wood joints that I had puttied, and then sanded the floors and walls. I started with medium sandpaper on the roof where the shingles were, then switched to fine grade paper for everything else. I wanted to sanicd the walls because, for the walls that had wallpaper, there was a bit of residual glue left, and sanding removed that.  For the walls that were painted, the paint was a gloss paint, and while sanding won't remove the paint, it will give it a rougher texture which will adhere better to wallpaper, or a different coat of paint (should I decide to do that.)  I also sanded the floor.  I'm not sure yet just what I'm going to do with the floors, but sanding the floors will enable me to redo them in a variety of ways....as soon as I can figure out what I'm going to do with them!

Next step will be to go through the inside of the house, with a tub of spackle in hand.  I want to fill in all the cracks in the ceiling on the second floor, and get the walls as smooth as possible, aI nd all the cracks in the walls on the ground floor.  So far the house has told me that he  (it's a he) wants the walls on the lower floor to be painted white, with the wood beams left as wood beams.  He is making noises about wanting the fireplace to be stoned, or at the very least a stone hearth.  I told him that the next thing that will happen (after the spackling) is some repair work on the stairs. A few of the risers are loose (hot glue, again) and need to be reglued.

Then I can start making the frames for the inside windows....  Fun!... 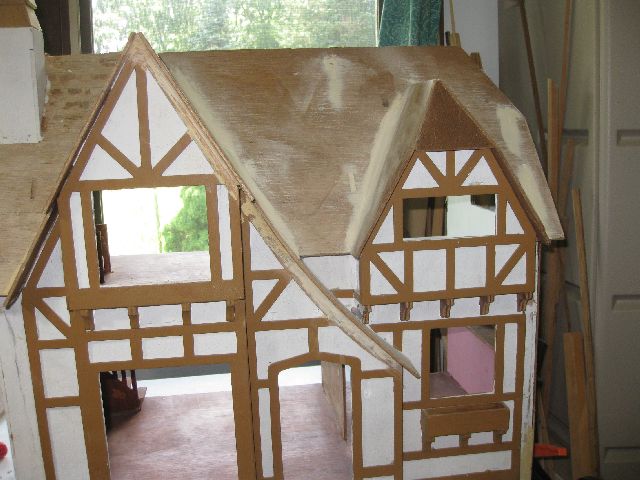 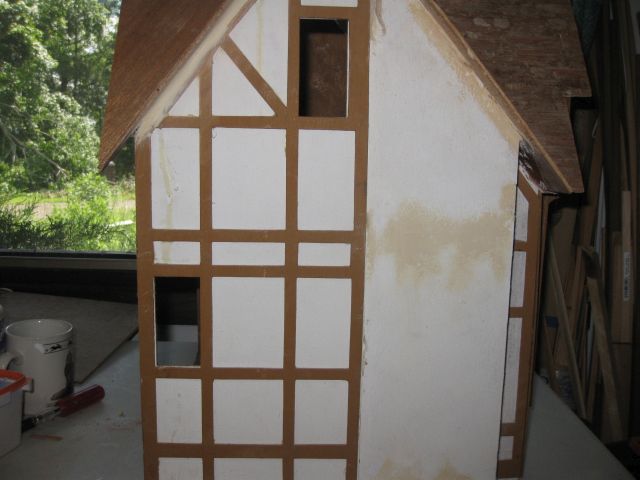