Happy Halloween to me! All my packages arrived today!

The first thing I did upon tearing through the boxes was to get to those ornaments! But Im not going to lie, I was disappointed. They were slightly smaller in scale than I had expected. Oh well! Thats what I get for planning a whole roombox before the inspiration pieces had arrived. Wadderyagonnado? I guess I have to work around it.

So the first thing I did was to de-ornament them, that is, I pulled out the ornament hook loops.

The fridge was battery operated so I had to pry off the back panel and do some re-wiring.

After removing the wires and bulb included in the ornament and gluing a GOW bulb in its place, I covered that with a piece of tin foil and replaced the back panel. I also sliced away a corner from the back panel for the new wire to come through.

Once the fridge was done I did the same with the stove. First I had to remove the scented packet. Then I had to pry off the back panel but this time was more difficult because the stove had a plug instead of batteries. I ended up completely mangling the back panel so I will have to use a piece of wood or something to patch it up. I was unable to remove the light from this one but fortunately there was a screw hole that worked out perfectly so I put a GOW bulb in there and glued it in place. once its dried I can replace the back panel and they will be ready to be spliced into the tapewire.

A few more pics are in the gallery. Let me know what you think! 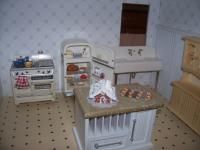